Posted on February 18, 2015 by hendersonintraining 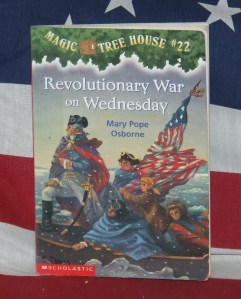 “The harder the conflict, the more glorious the triumph. What we obtain too cheap, we esteem too lightly.”- George Washington

In honor of Presidents’ Day this week, I selected Revolutionary War on Wednesday because it features George Washington and because my eight-year-old loves the Magic Tree House series. He (and I) love how Osborne places her main characters, Jack and Annie, into the historical period, and we feel like we are with them in their adventure. Come join George Washington while he leads a surprise attack!

In books #21-24, Jack and Annie help Morgan Le Fay, the magical librarian from Camelot save her kingdom. In the previous story, Civil War on Sunday, Jack and Annie found this note from Morgan:

They knew what to do: Enter their magic tree house, point to the cover of the book titled, Revolutionary War, and say the magic words, “I wish I could go there.”

Thus begins their dangerous adventure: Jack and Annie go back over 200 years into history where they are discovered by Patriots (thankfully not the Redcoats), meet the Commander-in-Chief, George Washington, and hear a compelling letter penned by Thomas Paine. Before George Washington leads his troops on a secret mission on Christmas Day, 1776, he instills courage into the Patriots with these words by Paine:

“These are the times that try men’s souls. The summer soldier and the sunshine patriot will, in this crisis, shrink back from the service of their country. But he that stands it now deserves the love and thanks of man and woman. . . .The harder the conflict, the more glorious the triumph. What we obtain too cheap, we esteem too lightly. It is dearness only that gives everything its value.”

The Captain, whom Jack and Annie met earlier among the Patriots,  gives Jack a note with some quotes from this speech to send back to his family in case he does not survive the battle. Holding his note, Jack realizes he has what he needs for Morgan’s library, the something to send, and they can return home! But, he can’t find Annie.

When Jack discovers her sitting on George Washington’s boat, he tries to pull her off, but it’s too late. They set off down the Delaware River in Pennsylvania with the 2,400 Patriot troops headed on their secret mission Christmas Day, 1776.

On their way to the surprise attack to capture 1,000 Hessians (German soldiers hired by the British to fight for them), Jack reminds the discouraged Commander-in-Chief, George Washington of his own advice:

“Jack looked at George Washington. ‘Even if things look impossible, you should keep going sir,’ he said. ‘The harder things seem, the greater the triumph, right? That’s what you read to your men. You have to keep going for their sake.’ “

” ‘Yes! And you have to keep going for our sake,’ said Annie. ‘For the sake of the future children of America, sir.’ ”

And he does. The Patriot’s battle and Jack and Annie’s journey were both a success. A fun book with a lot of history, adventure and valuable lessons!

Inviting You To Become FRIENDS with Jack and Annie & GEORGE WASHINGTON in Our Featured Friend: Revolutionary War on Wednesday

F-  When have you felt scared and excited all at once like Jack and Annie felt in their adventure? (ie. maybe when you learned something new like bike riding or skating?)

R- Can you relate to Jack and Annie when they were excited to meet someone they admired? Who did you meet and why is he/she special? (admire means to look up to, respect, show honor, want to imitate or be like)

I – Imagine you are with Jack and Annie on their journey with Washington, and act out your favorite part of the book.

E- Explore ways you and your family can make a difference in America as you are making history right now! Make a list and do what you can today. *Parents, taking your kids with you to vote is one great way to show this generation how to contribute to our country.

N- Navigate through a map of the 13 colonies, the Delaware River, Pennsylvania, and parts of Great Britain to see where the Revolutionary War took place.

D- Develop a timeline using the historical information in bold print throughout the book that tells the facts of the Revolutionary War.

S- Share what you learned about George Washington by selecting a printable to organize your findings throughout this book: http://www.enchantedlearning.com/history/us/pres/washington/

Our kids decided to “become friends” with this book  by doing the “I- Imagine” activity. They are the ones that gave me the idea to write this blog when shortly after Christian read the book, I saw them doing this: