Posted on July 15, 2014 by hendersonintraining

See Some Shark Facts From The Sea: “A shark’s skeleton is made of cartilage. A shark swims like no other fish. It glides. Sharks are cold-blooded, which means their blood changes temperatures as the water changes. The jaws of a shark are the most powerful on Earth.” http://www.kidsbooks.com

This week’s Kidsbook Friends theme is “Books to Sea”. When I think of summer, I think of the ocean. There’s no other place I’d rather be than at the sea, and based on all the fun Face book pictures I’ve been seeing, I think most of my friends feel the same way. Since an ocean vacation is not doable for us right now, we did the next best thing: a trip to an  aquarium. After exploring all the cool creatures there, we came across this book and are learning amazing facts. Sea Creatures published by Kidsbook is worth diving into!

The Table of Contents contains four main categories: Fish, Sharks, Penguins, and Whales & Dolphins. Two of our favorite creatures featured are the sting rays and the zebra shark. Knowing that the famous Australian crocodile hunter, Steve Irwin, died from a stingray accident in 2006, makes me want to know more about these sea creatures. This book describes details about many Rays such as the spotted skate, the manta ray, the guitarfish, the torpedo ray and the sting ray. Here’s what we learned about the stingray:

A stingray, like most rays and skates, lies in shallow water covered with sand and minds its own business…unless someone steps on it. Then…Whap!…It swings its long tail and strikes with its spine. The single spine on the tail of a stingray is poisonous and dangerous. The wound can be just painful or paralyzing, depending on the size of the ray.”

One sea creature that grabbed our attention at the aquarium is the zebra shark, also known as the leopard shark. I think it’s one of the few pretty sharks. They are gentle, so they can be kept in the aquarium and are spotted like a leopard. This shark’s tail is half of it’s length. Very cool!

Dive into this great book to learn more about what you can see in the sea! 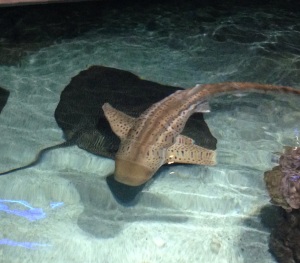 R- Which sea creature do you think people most relate to (have a special connection)?

E- Explore the ocean in an egg carton next time you see the sea:
Posted on:

N- Navigate your way through the ocean by pretending that you are one of the sea creatures described in this book. Make a list of the habitat that “you” need to survive including the food, plants, depth of ocean, along with the predators to avoid. Then draw and color a picture!

D- Develop a small salt-water aquarium for your home. Research what you need to put in the tank (chemicals and plants) and what small sea creatures can cohabitate (live together).

S- Share your memories from your trip(s) to the sea. What was your favorite activity? What was your greatest adventure? What sea creatures did you see?

*Fact to Make You Feel Better: Worldwide, fewer than 100 people are attacked in an average year by sharks. Some of these cases are provoked attacks, where the shark is caught, trapped, speared, or somehow bothered by people. (page 46) 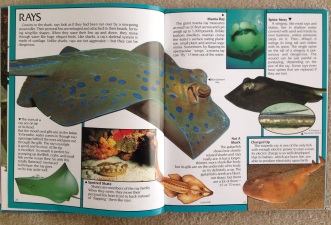 Subscribe to receive the blog posts directly to your e-mail by signing up on http://www.kidsbookfriends.com