Posted on May 4, 2016 by hendersonintraining

Okay, we’ve all heard the story of “The Three Little Pigs” more times than we can count… BUT, this poem captures the tale from the wolf’s point of view in a way that might change how we look at the wolf. Read it (or rap it)!

The Three Little Pigs
“ THE TRUE STORY”
By: Mr. Wolf

I am the wolf from the popular story;

The Three Little Pigs who got ALL the glory!

This is how the story really goes:

One day I was in my house alone,

When a sudden ring came from my phone.

I picked it up and heard a voice filled with worry,

My brothers and I are moving in May,

And we need our houses to be blown away.

I quickly replied, “Of course I will kind Pig.”

Then I grabbed my vest and was there in a jig.

I began at the house made of long, thin straw,

And I huffed and I puffed, till I made the house fall.

I moved on to the next house, that was made of twigs,

When at the doorstep stood the three little pigs.

One pig said, “Ha! We tricked you, hairy beast!”

And they picked up their phones and called the police.

Now I sit here alone in this dusty cell,

But I will get revenge, and soon I will bail! 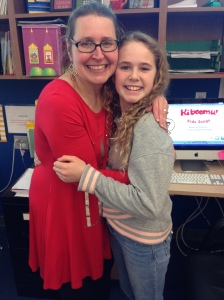 Grace Knight is a seventh grader at Sunnyvale Middle School. Her clever twist in her poem, “The Three Little Pigs: The TRUE Story” is just a flavor of her creative, spunky spirit! Cynthia, Grace’s mom, is pictured with her.